If you’ve been following along with our boat renovation adventures, you won’t be surprised to learn that Odin’s fit-out out is taking us longer than anticipated. Usual story.

While the new bedroom creeps and crawls along with the little weekend effort we have to spare, other areas like our wheelhouse have gone up in (practically) a day. We’ll celebrate the small wins where we can. Cheers!

You might remember we collected Odin from the boat yard with a new bedroom extension looking like this: 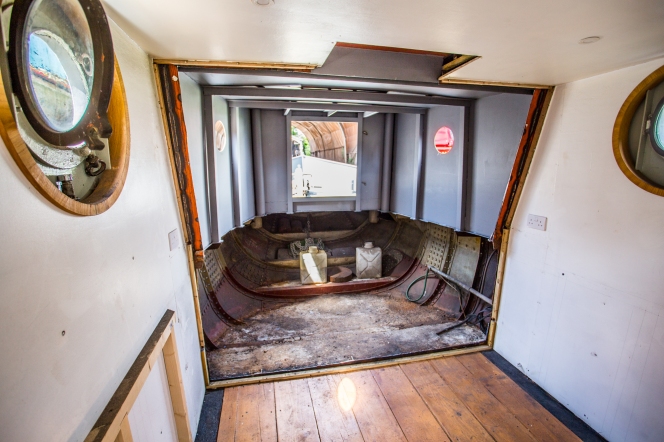 I illustrated an impression of our future bedroom to demonstrate what we’re aiming for:

Since returning home to our island mooring, Chris has spent many weekends and drill bits and screws and wooden battens and foam gun-cramped arms creating this:

We also encountered a small problem with a damp floor. All steel-hulled boats battle with condensation in cold climates, it just needs to be managed. Usually you simply let the condensation travel down into the bilges at the bottom of the boat, then pump it out occasionally. Our problem appeared after concreting over the existing floor. We had inadvertently trapped some condensation that liked to travel down behind the old concrete and into the bilge.

It was a head scratcher of an issue that set us back quite a few weeks, but we think we’ve now dammed the source with a shed load of silicon and can continue on. We just have a new pocket of water to empty in the winter months.

Most recently, we’ve added some self-levelling latex compound followed by some vinyl tiles. These won’t be on show, but will form the base of our storage bed where we’ll storing… well, everything!

With the help of a neighbour, we’re currently in the process of lining the walls and roof with bendy plywood. Once it’s done, it’ll hopefully make the room feel like an actual bedroom for the first time in a while. In a week or so, we’ll have it painted and can move on to adding the gas lift bed. Hallelujah.

We’re still living aboard while the work takes place which can be super annoying and uncomfortable at times given that 1) we don’t have a proper bed (just a futon on the floor), and 2) all our stuff is currently piled in hallways and the main living space. We’ve just got to keep focusing on the end state… which is not far off I hope.

Well perhaps not quite a day when you total-up the amount of time we spent waiting for our incredibly busy canvas team to reach our name on their long list of jobs. We felt they made the best quality canvas canopies on the market, and while not cheap, it was worth the wait.

On the first day, the team arrived to measure up a canvas template over their newly installed frame. 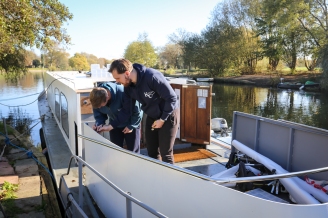 A couple of weeks later, on the rainiest day of the season so far, they returned with a shiny new canopy. Fabulous timing. 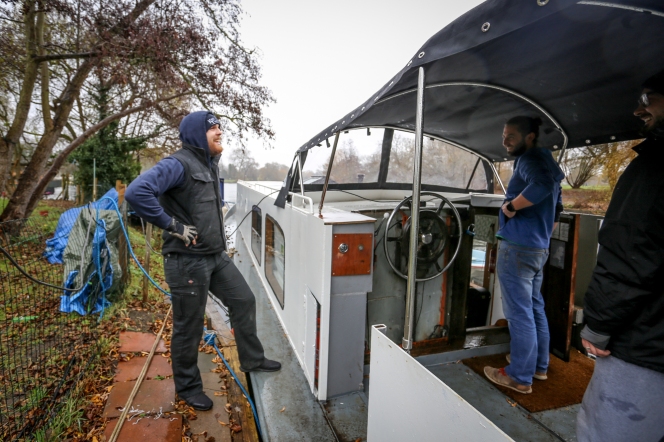 Over the course of a few hours, the team fitted press studs and tension clips around the outside of our new steel wheelhouse base.

Once the sides and roof were in place, I was taken aback at how much space emerged.

Standing under the new canvas looking around, I could see my mind-palace version of Odin’s wheelhouse emerging. Wood-lined panels, fitted storage seating, a removable table surrounded by family and friends, cruising up and down the river in the warm summer sun… it shouldn’t be too far away now.